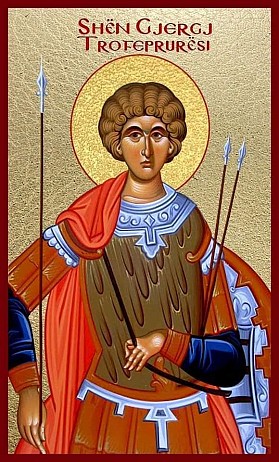 The holy, glorious and right-victorious Great-martyr and Trophy-bearer George was a Christian Roman soldier killed under Diocletian at the beginning of the fourth century. Though he was born in Cappadocia, his mother was from Palestine, and thus he is a particular favorite of many Palestinian Christians. He is also the patron saint of Moscow, Georgia, and England, amongst other places. The Church commemorates George on April 23, and the translation of his relics on November 3.

According to Tradition, George was born to a Christian family during the late 3rd century. His father was from Cappadocia and served as an officer of the army. His mother was from Lydda, Palestine. She returned to her native city as a widow along with her young son after the martyrdom of George's father, where she provided him with a respectable education and raised him in piety.

The youth, it would seem, followed his father's example in joining the army soon after his coming of age. He proved to be a charismatic soldier and consequently rose quickly through the military ranks of the time. By his late twenties he had gained the titles of tribunus (tribune) and later comes (count). By that time George had been stationed in Nicomedia as a member of the personal guard attached to Roman Emperor Diocletian (reign 284–305).

In 303, Diocletian issued an edict authorising the systematic persecution of Christians across the Empire. His caesar, Galerius, was supposedly responsible for this decision and would continue the persecution during his own reign (305–311). It is believed that George was ordered to take part in the persecution but instead confessed to being a Christian himself and criticised the imperial decision. An enraged Diocletian proceeded in ordering the torture of this apparent traitor and his execution.

Then, after innumerable forms of torture, George was executed by decapitation in front of Nicomedia's defensive wall on April 23, 303. The witness of his suffering convinced Empress Alexandra and Athanasius, a pagan priest, to also become Christians, and so they also joined George in martyrdom as consequence. George's body was then returned to Lydda for burial, where Christians soon came to honour George as a martyr.

St. George is often depicted with a dragon or some other serpentine creature under his feet. This comes from a legend whose details may vary according to local tradition. The tale begins with a dragon making its nest at the spring (or lake) that provided a town (either near Beirut or Silena, Libya, often) with water. Consequently, the citizens had to temporarily remove the dragon from its nest in order to collect water. To do so, they offered the dragon a daily human sacrifice. The victim of the day was chosen by drawing lots. Eventually, the "winner" of this lottery happened to be the local princess. The local monarch is occasionally depicted begging for her life with no result. She is offered to the dragon, but at this point a traveling George arrives. He faces the dragon, and, after invoking the name of the Holy Trinity, slays it and saves the princess. The grateful citizens then abandon their ancestral paganism and convert to Christianity.

The story may or may not be taken entirely literally. For example, the battle between George and the dragon may represent the battle between Christianity and Satan or between St. Michael, the archangel, and Lucifer. Dragon-slaying does appear to be a common religious theme; it may be the case that George has served as a Christianized version of older Indo-European deities and their folklore.

St. George is most commonly depicted in early icons, mosaics and frescoes wearing the armour of a Roman soldier. After the fall of Constantinople and the association of St. George with the crusades, he is more often portrayed mounted upon a white horse. At the same time St. George began to be associated with St. Demetrius, another early martyred Roman soldier. The two saints are often portrayed together mounted upon horses; in this respect they are likened to earthly manifestations of the Archangels Michael and Gabriel. (Equating George with Michael is understandable, as many icons of Michael also portray him on a horse slaying a dragon.) St. George is always depicted upon a white horse and St. Demetrius on a red horse (or a black horse where the pigment used has decayed).

You were bound for good deeds, O martyr of Christ: George;
by faith you conquered the torturer's godlessness.
You were offered as a sacrifice pleasing to God;
thus you received the crown of victory.
Through your intercessions, forgiveness of sins is granted to all.

God raised you as his own gardener, O George,
for you have gathered for yourself the sheaves of virtue.
Having sown in tears, you now reap with joy;
you shed your blood in combat and won Christ as your crown.
Through your intercessions, forgiveness of sins is granted to all. 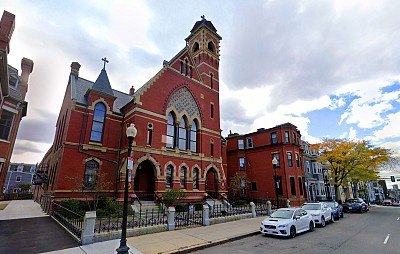