Our first years as a community witnessed our rally around a fiery and skilled orator: Fan. S. Noli, who launched a truly remarkable career equal to none. Called to God’s service, he was ordained the priesthood on March 8, 1908 and established Saint George Cathedral as a parish that first Sunday of Orthodoxy in Boston. The times required the coterminous effort to establish a church ministering to Albanian immigrants in their own language, providing liturgical texts and in fostering awareness in the homeland of the principles of self-determination learned here in the U.S.

This first ten years in our octave saw the liberation of Albania in 1912, sparked in large part by Albanian – American volunteers who wore the charge on their caps: “Liri a vdekje,” (Liberty or Death.) In Boston and environs, the first newspapers: Kombi (1906), Dielli (1909), were published followed in quick succession by Adriatiku, Illyria, Perparimi, as well as the formation of the Pan-Albanian Federation of America (VATRA) which Noli also headed with Faik Konitza in 1912.

The tireless Noli traveled to Bulgaria, Romania, Russia, Italy, England and France to help organize communities in Europe. Our first period culminates in 1918 when Noli met U.S. President Woodrow Wilson on July 4th in Mount Vernon and receives the pledge that: “I have one voice at the Paris Peace Conference and I shall use it on behalf of Albania.” Our forbearers, Noli’s young immigrant supporters funded his enormous work from their weekly salaries of $5.

A time of opportunity and achievement, this decade saw Noli impress the League of Nations in Geneva and secure modern Albania’s boundaries. In the U.S., new parishes sprang up in Natick, Worcester, Philadelphia, Jamestown and Southbridge. New clergy were ordained for Saint George while Noli was on the road: Fr. Naum Cere, an accomplished iconographer, Fr. Damian Angeli, Fr. Vangel Chamche (later to become Bishop Agathangel in the homeland) and Fr. Koli Kristofer (first Albanian immigrant to America who had arrived in 1886.) Professor Thoma Nasse organized the first choir while also serving as conductor of a band that toured the homeland.

In 1922, our parish – which had met in numerous lofts and halls for services – acquired the church building on Emerald Street and at the Congress at Berat, Albanian-American clerics proclaimed an Autocephalous Church in the homeland. Noli had been consecrated bishop in Korce in 1923 and served briefly as Premier of Albania in 1924 before having to flee to exile in Germany and Austria where he translated Shakespeare and wrote poetry.

In our South End church, chanters preserved the ancient tones while Fr. Jacob Grigorieff of Salem helped constitute the choir as we know it today. Noli returned to resume his duties as head of an American diocese, women’s societies formed (Bashkimi, Daughters of Saint George) and the home perpetuated ancestral cultural and religious customs in the West End, South Boston, Somerville and other areas where our families lived and raised their children. Women arrived in greater numbers as spouses and mothers and our men no longer dreamed of returning to struggles abroad, but turned to establishing themselves as citizens here and ensuring the stability of their families. During the Depression, fruit peddlers would park their pushcarts in front of church – a block which we shared with an Orthodox Jewish synagogue across the street. Father Dhosi Katundi served us then until he formed Saint John the Baptist parish. King Zog’s sisters arrived to pay homage to Noli during their visit to the church while on tour in America.

War clouds gathering in Europe began this era as Albania was abruptly invaded on Good Friday, 1939 and we saw that country’s last arrivals to the U.S. migrate in large numbers. Off to World War II went our sons and daughters, solidifying our loyalties and ensuring our prayers. Fathers Vani Chani, Stavro Shkembi, Stephen Lasko and others served at the altar as our members opened cafes, ice cream parlors, variety stores and settled in to the American way of life. Newly returning soldiers and sailors formed their own veterans organization. Albania embarked on its socialist road and while we retained an abiding interest in the homeland’s fate, political factors focused our attention on the American scene all the more.

A loose collection of parishes were now organizing as an Albanian Diocese to share common concerns and problems, a theological fund for student priests was established and a uniform constitution was in the works. The youth organized the Albanian-American National Organization, and the Free Albania Organization faced the challenges of the post-War era. More church books were published; a Festal Menaion, Triodion, a choral hymnal and the beginning use of English in services made its debut in 1948.

A splendid “new” Cathedral on East Broadway became our home in 1949: men and women now worshipping together as families gravitated to church during this era of unprecedented church attendance across the country. Following Father Thimi Theodos’ tenure of devoted service, Father Christ Ellis brought a finesse and standard of quality to Cathedral life. We sponsored a baseball team, a new constitution for the diocese and a Sunday School Program organized by Dr. Andrew Elia formed with a new building acquired for this purpose. English services commenced on a regular basis as Noli preached of an “American Orthodox Church,” as well as of civil rights and the merits of a vegetarian diet.

A bright young restaurateur, Anthony Athanas, chaired our 50th Anniversary celebration which drew hundreds of people in May, 1958. By this time, the diocese had published over 20 church books in English and attempted to meet needs of the young.

Following a warm lull of positive growth, Noli’s death in 1965 was followed by a period of turmoil and court suits which set families against each other and opposing positions solidify into animosity. Lay Chairman Gary Riska weathered this storm with discipline and intelligence as the new Bishop Stephen Lasko waxed strong in the community kiln. Father Sotir Dilogika served as our Dean with loyalty as we weathered an internal storm while our nation was enduring its own tragedy beginning with the assassination of President Kennedy and continuing through the ordeal of the Vietnam era.

Like our Illyrian ancestors, we weathered this period with successive emotions of self-righteousness, passion, disgust, stoic survival and even a heroic tenacity. But we made it through!

A new maturity seemed to characterize this period as elders turned over the reins of parish leadership to their younger sons: now accomplished teachers, businessmen and engineers. The Cathedral’s anterooms were refurbished providing us with a much-needed Auditorium and conference space. Drawing us closer together as a diocese, Sotir Nikola, Arthur Kotelly and Ronald Nasson served as Lay Chairs helping us focus on the Orthodox Faith. Our Church School experienced a second revival as talented teachers served, teens gathered in retreat and the choir again blossomed. Bishop Dmitri and Metropolitan Theodosius secured our spiritual stability following Bishop Stephen’s leadership in guiding us into the Orthodox Church in America as our horizons broadened once again. The Annual Conventions of the Archdiocese met in different cities and not Boston alone, as we were among the first to institute workshops and seminars for the delegates.

I arrived as pastor with my wife and saw my family grow along with the congregation’s which was gradually becoming more diverse and cosmopolitan in nature. Parishioners now came from over 35 towns and districts of Greater Boston bringing friends and relatives and neighbors with pride. Non-Albanian spouses began to think of Orthodoxy as their own and were chrismated in greater numbers as we assumed a prominent role as a spiritual center in Boston. We sponsored U.S. Bicentennial events and media productions, continued to beautify the church structure, gathered in picnics, fashion shows, Mardi Gras, updated our communications, organized and streamlined the church offices. We began reaching out to share our precious faith of which we had become increasingly confident and proud. Our religious store under Mildred Metro’s tutelage grew and expanded into the ethnic sphere.

With the rest of the nation our community experienced a “quest for roots.” The Noli Centenary was commemorated with a series of events including a crowning symposium at Harvard. Groups began to visit Albania opening up a sharing of viewpoints. Our Diamond Jubilee in 1983 was a hallmark year and Thomas Sotir as Lay Chairman drew more and more on the resources of leaders throughout the diocese and not simply Boston alone. Our Choir released a first-time ever recording of Albanian Orthodox Church music, a Central Fund was established to assist missions and struggling parish communities, as the texture of the community was characterized by greater affluence and intermarriage. New issues faced us: church positions on inter-communion with non-Orthodox, abortion, homosexuality, better relations with the Greeks, attracting the young or fallen-away faithful: all the challenges facing most American Orthodox, ethnic or convert. Florence Pano helped us think of our fellow parishioners in a vibrant lay ministry effort. Diana Marie Prift Chaired our Diamond Jubilee with expertise, complemented by Lynn Phillips’diligence in assembling historical souvenir journals to chronicle our parish life.

Our Cathedral embarked on restoration of our stained-glass windows, remodeled our Chapel in a classic Albanian-Byzantine style and we shared Lenten services with sister Albanian parishes to foster the “family feeling” that we had seemed to be outgrowing. A certain nostalgia for the past characterized our attitudes as we reluctantly faced the future: like the two-headed eagle, we are a people that look back as much as we look ahead, so it’s no surprise. Your pastor became the first clergyman to visit then atheist and isolated Albania in 25 years, embarking on a diplomatic, cultural and spiritual ministry to restore relations and lay the ground for a more cooperative future.

At every level, we asked ourselves many questions as we faced the inevitable challenges that loomed ahead. Should we consolidate some of our churches in Boston to better serve a disparate community? How can we re-unite with our Albanian Orthodox brothers and sisters both here and in the homeland? What is our role as American Orthodoxy approaches its own bicentennial and our nation approaches the next century? What do the youth need of us? Can we be faithful to our ancestral heritage as well as evangelize those neighbors who are unchurched? How are we to remain steafast in our faith, yet remain open to share with people of other faiths? As we celebrated our 80th Jubilee under the expert joy offered by Chairperson Ruth Karchenes, we knew the answers to these and many other questions the future would hold yearn to be answered. For the Glory of Our Lord and Savior, Jesus Christ. 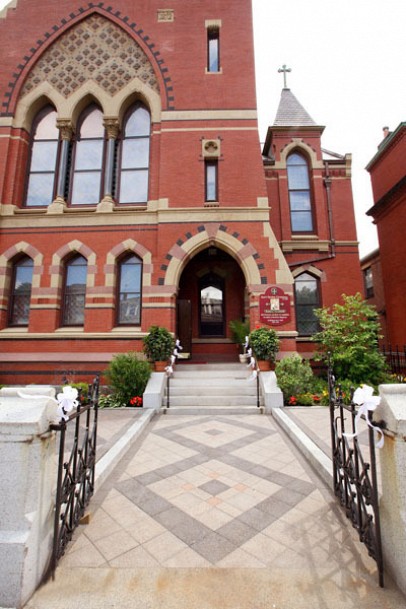